At first glance, Bridge Constructor Portal is like so many physics puzzlers before it – craft a bridge using a fixed list of materials, and hope that it can bear the stresses and strains to get something from A to B without collapsing under the pressure. What makes Bridge Constructor Portal stand out is it takes this concept and then mixes in a bit of Aperture science, that slightly deranged experimental company made famous in the Portal games, GLaDOS, turrets, portals and all.

Wait, what? If you are anything like me you will have read that and immediately have questions – a physics-based puzzle game, featuring Aperture science and portals, but it isn’t Portal 3? Or dare I even say Half-Life 3? How Bridge Constructor Portal was pitched is beyond me, but someway along the lines someone must have asked those questions surely? 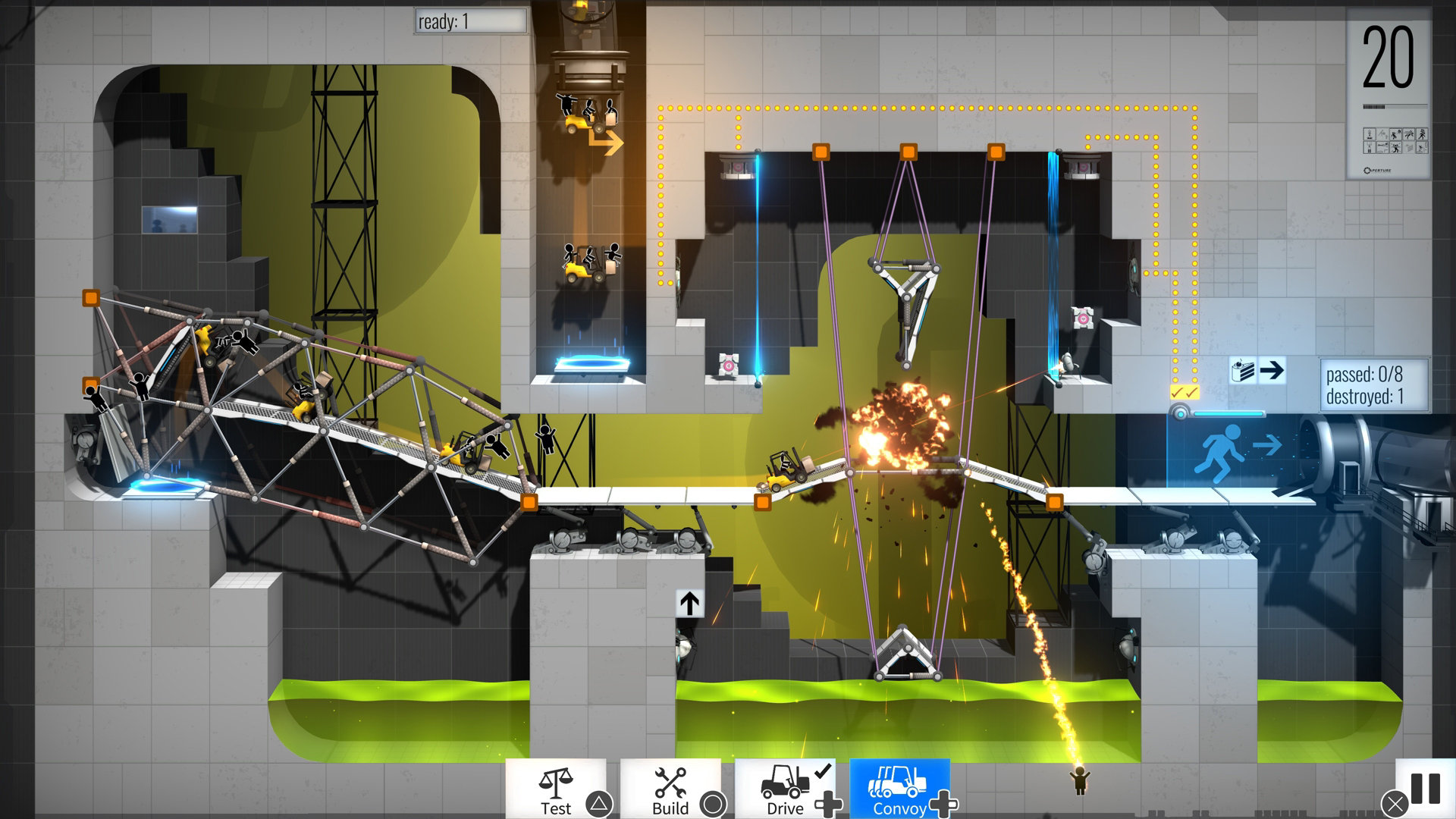 The thing is, Bridge Constructor Portal works. The gameplay is far from groundbreaking, but within the universe Valve originally created for Half-Life and then further developed in Portal, building bridges seems like a strange enough task that it isn’t too hard to imagine such experiments taking place behind the closed doors of Aperture Science.

The premise in Bridge Constructor Portal is a simple one that has been seen hundreds of times before. Each level tasks you with building a bridge using either steel supports or rope that can be attached to various anchor points around the level. When you are confident in your creation you can either test it to see if it can at least support its own weight, and then send the first of a potential convoy of forklift trucks across it to reach the end goal and ultimately complete that level.

The levels themselves all start simply enough, but quickly escalate in difficulty to include jumps, turrets that will shoot on sight, and later still gels that will either speed your vehicle up or bounce it into the air on contact. All these mechanics work well to increase the difficulty without seeming outlandish, and it is here that the setting of Aperture works brilliantly. GLaDOS, the homicidal A.I from the Portal series introduces most levels which further adds to the aesthetic and makes Bridge Constructor Portal feel like some sort of unofficial sequel of sorts, like an adopted second cousin, but this is as far as the relationship goes. By using many of the assets that were used within the Portal games to create puzzles, right down to the companion cube that can be used here to activate the odd switch or take out a pesky turret, Bridge Constructor Portal does just enough to make itself stand out among the crowd of similar physics construction games that are available. 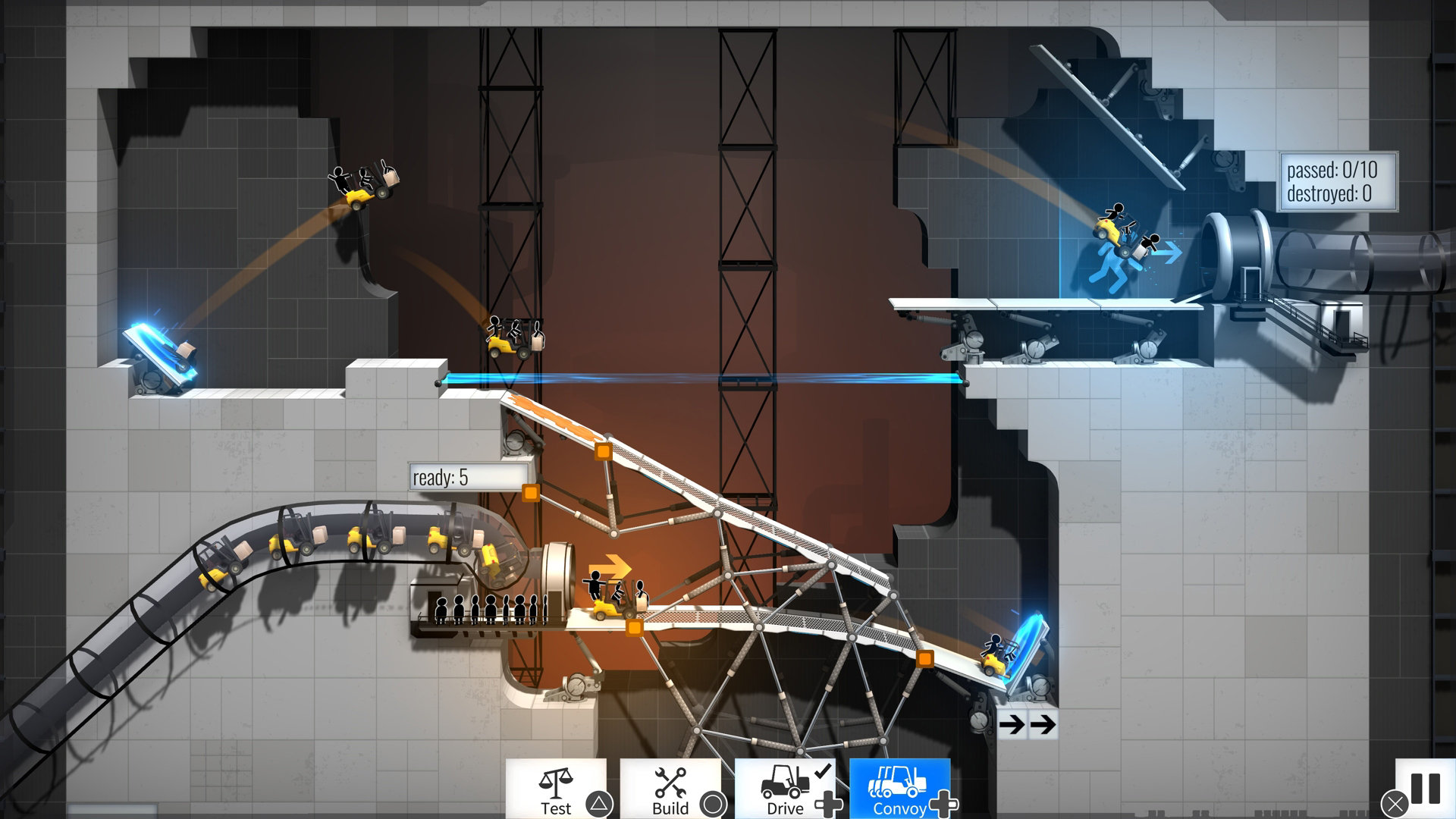 Bridge Constructor Portal released on mobile and Steam back in December and it’s PC/touch control roots are obvious here. It makes the transition seamlessly enough, getting around the fidelity issues that a controller creates by offering up the option to zoom in or out when precision is required, and the game gives various visual clues to help you out along the way. Want to stretch a beam out across a chasm? It’ll turn red the second you stretch it too far, indicating that you will need to add a few beams to support it. Want to know if a beam is within reach of an anchor point? A white dotted line will appear to show you how many anchor points are available to give it that extra level of support. Such clues are simple and effective, and work within the overall, slightly outlandish tone the game is aiming for.

Each level is self-contained, which does give it a certain pick up and play kind of feel, which for me only furthered it’s appeal whenever I fancied something quick to play in short bursts or in between longer titles. Sitting down to play for longer periods I did find my attention waning a little, but I always found i would come back and play later with no hang ups or that panic about what I had to do next. In fact, the most annoying thing I found while playing Bridge Constructor Portal was the music, which does feel a little like that knock off jazz you often hear in elevators, but as far as things go that is an incredibly minor complaint.

Bridge Constructor Portal, besides being a right mouthful of a title, is an engaging physics puzzler that is entertaining and challenging enough to fill those odd five spare minutes, but it won’t take over your life. Good for jumping in at quick bursts, if you’re looking for something quick and easy that you can play without much commitment then, Bridge Constructor Portal might just be your next quick fix.

Bridge Constructor Portal is an enjoyable physics puzzler that mixes the irreverent world of Portal with Bridge construction – a sentence that I never thought I would type out but that works surprisingly well in practice.

Detroit: Become Human Hits the Shelves on May 25th

Here’s Every PSVR Announcement From the Latest PSVR Spotlight