Dead Cells caused quite a bit of debate here in PurePlaystation Towers. Roguelike’s – yes or no? The whole genre seems to have exploded in recent years, and love them or hate them they are here to stay. Dead Cells continues this trend, getting more right than it does wrong and creating a compelling world that utilizes the whole play-die-repeat mechanic as part of its minimalist story. 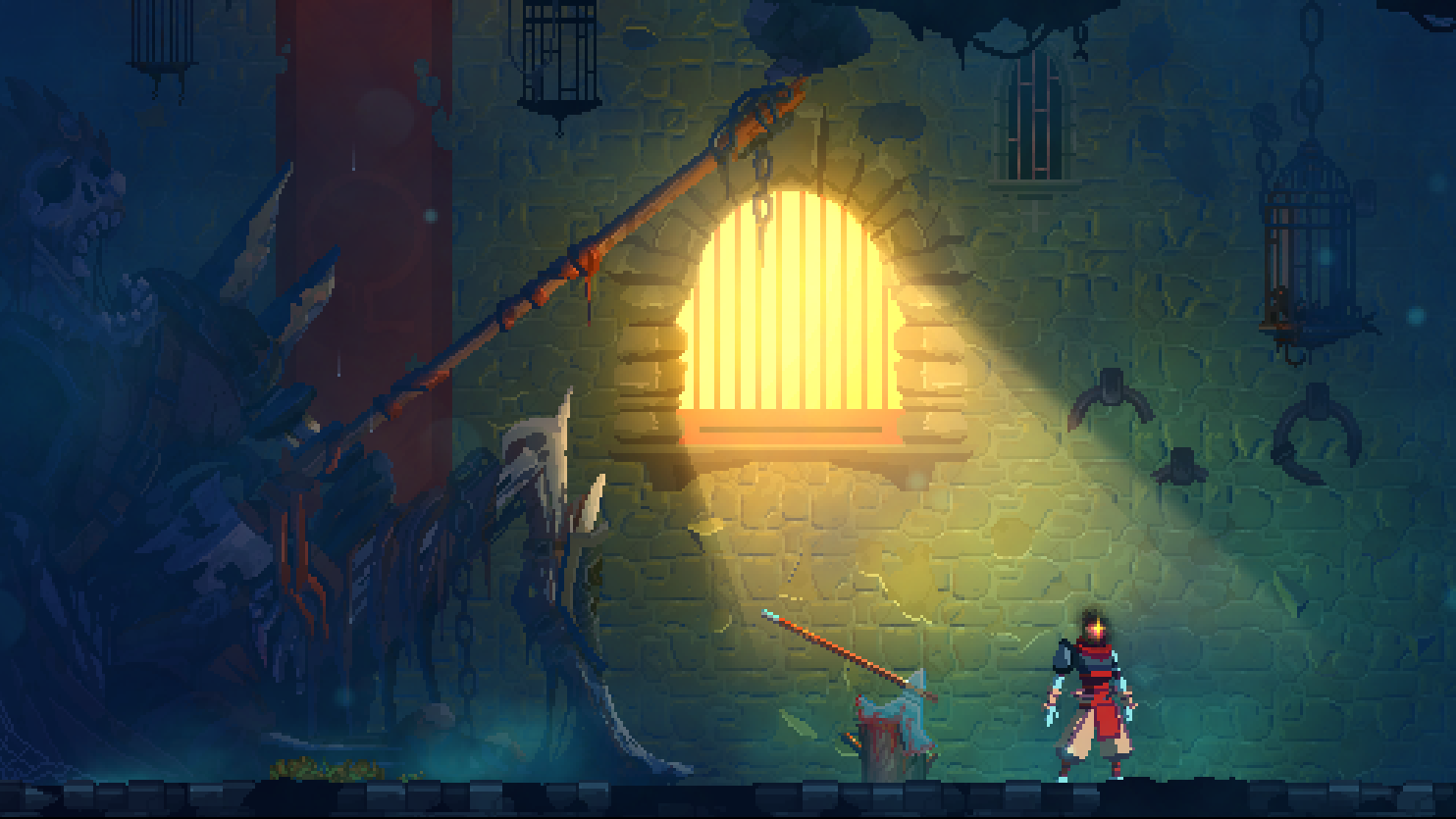 The premise to Dead Cells is simple – you start off as a mass of cells that quickly falls from a tube in the ceiling like a blob of toothpaste, before slithering and reanimating a nearby dead corpse. It is this corpse that you take control of, running, jumping, slicing and rolling through each randomly generated level. The controls are tight, and platforming in Dead Cells is enjoyable and quick to pick up. Developers Motion Twin have done an excellent job, and Dead Cells does hark back to those 8-bit games of yesteryear, pulling all the right nostalgic strings. Obvious comparisons such as Dead Cells’ 2D pixel art graphics and side-scrolling aside, Dead Cells is tough – and it knows it.

Fighting your way through the first level is easy, and serves to introduce you to the basic gameplay. Running and jumping through the world is fun, and early on combat finds you ploughing through enemies with ease. Dead Cells wastes no time in shifting this up a gear, and it isn’t long before you find yourself on the wrong side of an enemies attack, at which point you find your mass of cells back at the beginning, dropping from the tube in the ceiling and reanimating another corpse to do it all over again. It is here the roguelike elements kick in – the randomly generating levels, the permadeath, the skills to be updated to help you on your quest. Quickly Dead Cells pulls you in, and you realise that rather than being the end, dying is part of the game and something that must be used in order to progress further. 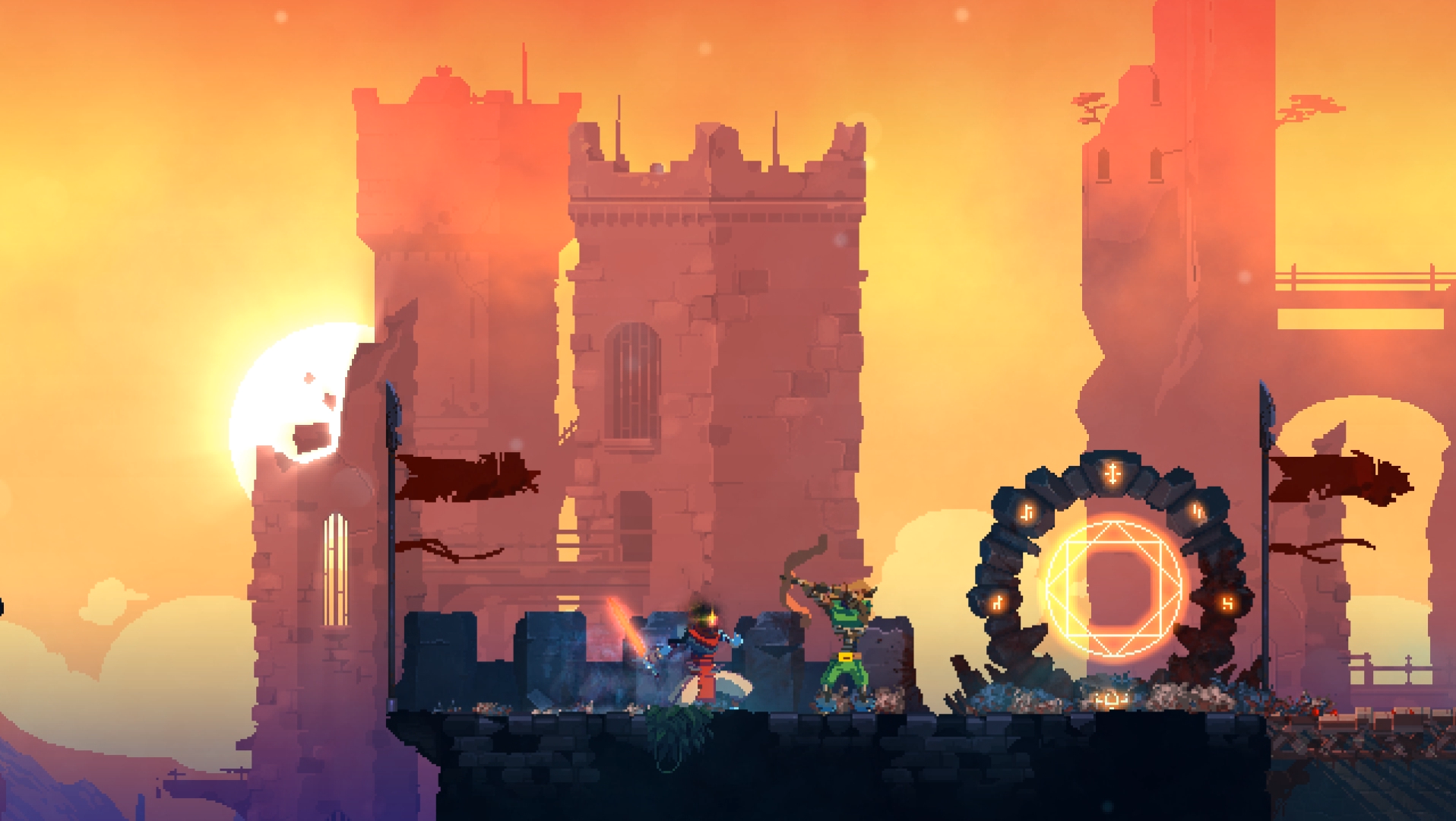 This whole rinse and repeat cycle works, but it does take some repeating before you start to feel the benefit. I did find the whole live and die cycle a bit tedious, with the penalties outweighing the rewards to begin with, but this balance does shift if you stick with it. I’ve lost count of how many times I’ve died and started again – sometimes I stick with it but other times I rage quit in frustration knowing that I have to begin it all again, slowly upgrading my avatar with each death and revive in order to creep my way slowly into the nooks and crannies that the game purposefully seems to generate. Dead Cells knows this, and seemingly goads you into exploring every hidey hole just on the off-chance that some treasure lurks in the shadows. That, and some doors require you to get to them within a set time limit, causing you to speed run your way through certain stages in the hope of arriving before the timed door locks out. This further feeds into the live and die cycle as I found that I was more likely to die when rushing through a level instead of thinking about what I needed to do and taking my time.

Each section is randomly generated, so finding a path and sticking with it doesn’t work. The game follows a simple structure in that you always begin in the Prisoners’ Quarters, but from there it could branch out into a number of places that I have encountered this far – you could find yourself in the deepest sewer, or jumping across the ramparts of the castle, it all depends on the world that has been generated this time. To make navigation a little easier each section does have numerous teleports, large rings that activate as you walk past them and a map that clears as you explore, so you can zip around quickly between the unlocked teleporters should you need to. Once enemies have been cleared from a section they stay dead unless you leave and revisit, so exploration is a viable and sensible option in order to hunt for items and cells, but more on them later.

Each go through the world allows you to unlock new abilities and upgrade your weapons which in turn allows you to progress further. This live die repeat mechanic is a one that is crucial to Dead Cells, and does take a while to get going, with each upgrade allowing you to progress a little further each time. At first, and depending on your level of skill, this repetitive nature can be more frustrating than rewarding. Due to its nature, Dead Cells offers no checkpoints or saving structure as you would expect, and the joy of reaching a new stage or area is quickly replaced with annoyance when you die and have to start all over again from the beginning. This is of course part of the challenge, but for some it might work to turn you off, particularly as the rewards come slowly at first. It is here that skill and patience win the day.

Enemies use pattern based attacks, and in order to progress these must be learned and used to your advantage. At first glance combat in Dead Cells looks like your standard hack and slasher, but in reality it is surprisingly nuanced and requires more than simple button mashing. Weapons vary from standard swords that require you to get up close and personal to ranged weapons, or magical traps that allow you to hold enemies in place. Two melee weapons can be held at once, alongside a further two throwables, called Skills, such as grenades or traps. This allows for some level of strategy to how you approach combat, mixing it up to suit your own playstyle. Skills add a further layer of complexity, as these can be used as many times as possible but require a cooldown between uses.

Combat is fast and unforgiving, with enemies coming in a variety of shapes and sizes. Weapons too can be upgraded as you progress, either finding them in chests or dropped by bosses, and many offer different bonuses or stats that will help you on your way, and some that carry over into your following playthroughs once unlocked. Weapons drops are random too, and this can add to the frustration once you find a weapon you like only to lose it when you die and respawn to begin again with the base equipment. 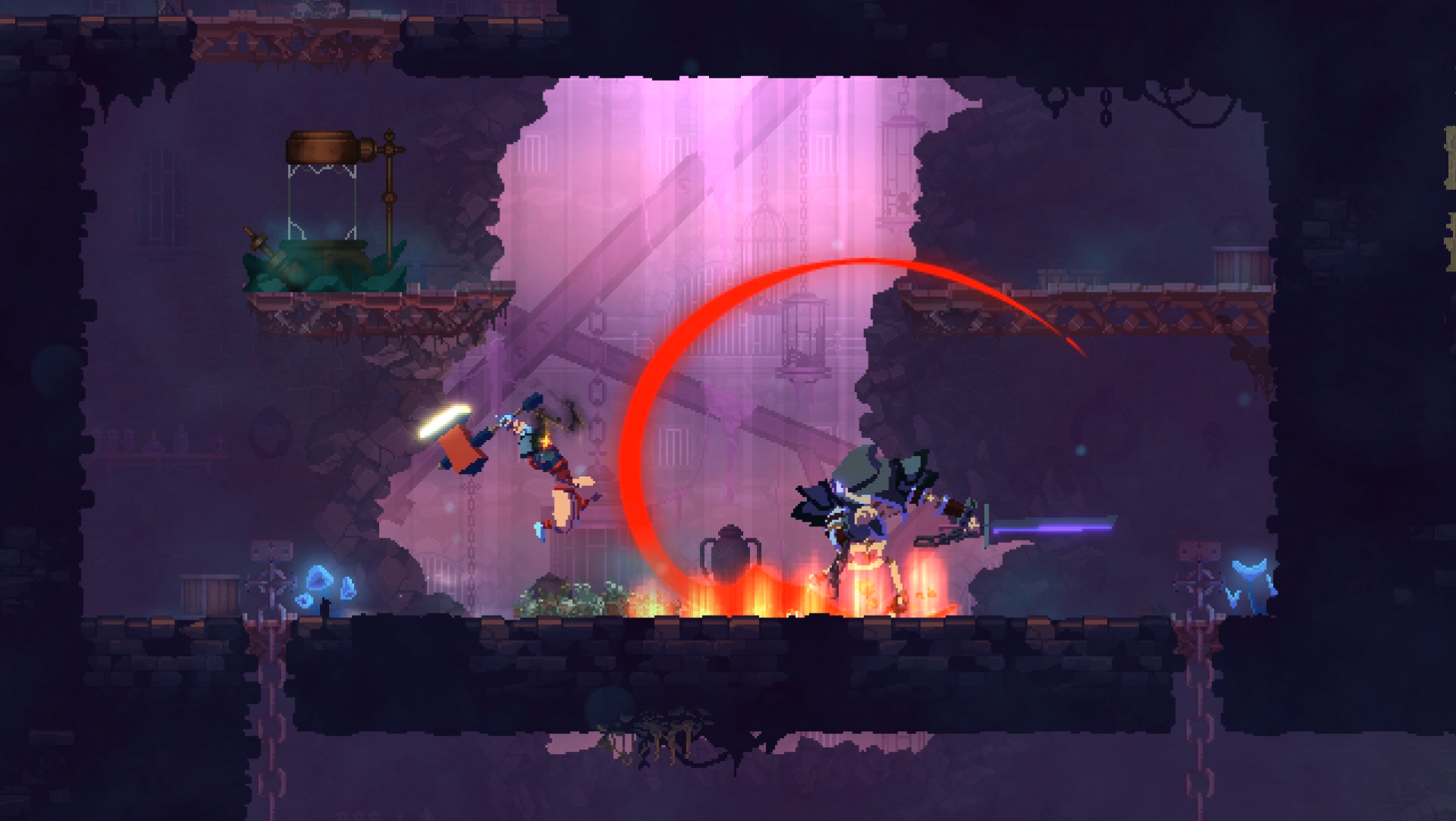 Defeating enemies eventually nets you cells, which are the currency used to upgrade your abilities. Before beginning each area you will meet a NPC called the Collector, who can use these cells to upgrade weapons, research new ones from blueprints that enemies sometimes drop, or any number of things to help you on your way. Dumping your cells in with the Collector is the only way you will progress – for a start you can’t leave the area he resides in until you have spent all the cells you currently have in your possession. These upgrades stick over each playthrough, and don’t reset. This works in Dead Cells advantage because there would always be something I would be close to unlocking after each death, and collecting cells became an important part of each playthrough. This drip feeding of rewards does work when you stick with it, and it does pull you back in, provided you can work through the frustration felt early on.

This is the main takeaway from Dead Cells. The first few hours are enjoyable, followed by a lull in the middle before picking up again later on once the first few upgrades have been purchased allowing you to progress that little bit further. This rinse and repeat cycle isn’t for everyone, but luckily for Dead Cells the platforming and combat are enjoyable enough to be worthy of playing numerous times, and it does take me back to the 8 bit games of old where I had one life left and I had to make it count. Dead Cells takes this idea and times it by 100, slowly drip feeding it’s secrets out with every playthrough. Dead Cells has a lot about it to enjoy, and if roguelikes are your thing it is well worth a look.

Review Disclaimer: This review was carried out using a digital copy of the game provided by the publisher. For more information, please read our Review Policy.