Holfraine is the gaming equivalent of a time machine. When I first booted the game up, for a second I felt like I was back in 2003 sitting in my old room, about to play an online multiplayer for the first time. Holfraine has massive PS2 vibes – and this was something that I was unable to shift during the whole time I sat playing it.

Developed by Fluxart studios, Holfraine started life on Kickstarter, and it shows. Taking inspiration from similar games, Holfraine tries to do something new with the shooter genre but in doing so it feels ironically very similar. Each match starts fairly quickly and has you completing tasks that we’ve all seen before – holding down an area for a set amount of time, protecting a drone, you know the usual online shooter sort of thing. The difference here is Holfraine mixes it up on the fly – so mid-game you might switch between one or the other without nary a warning in the games main (and only) mode, All in One. 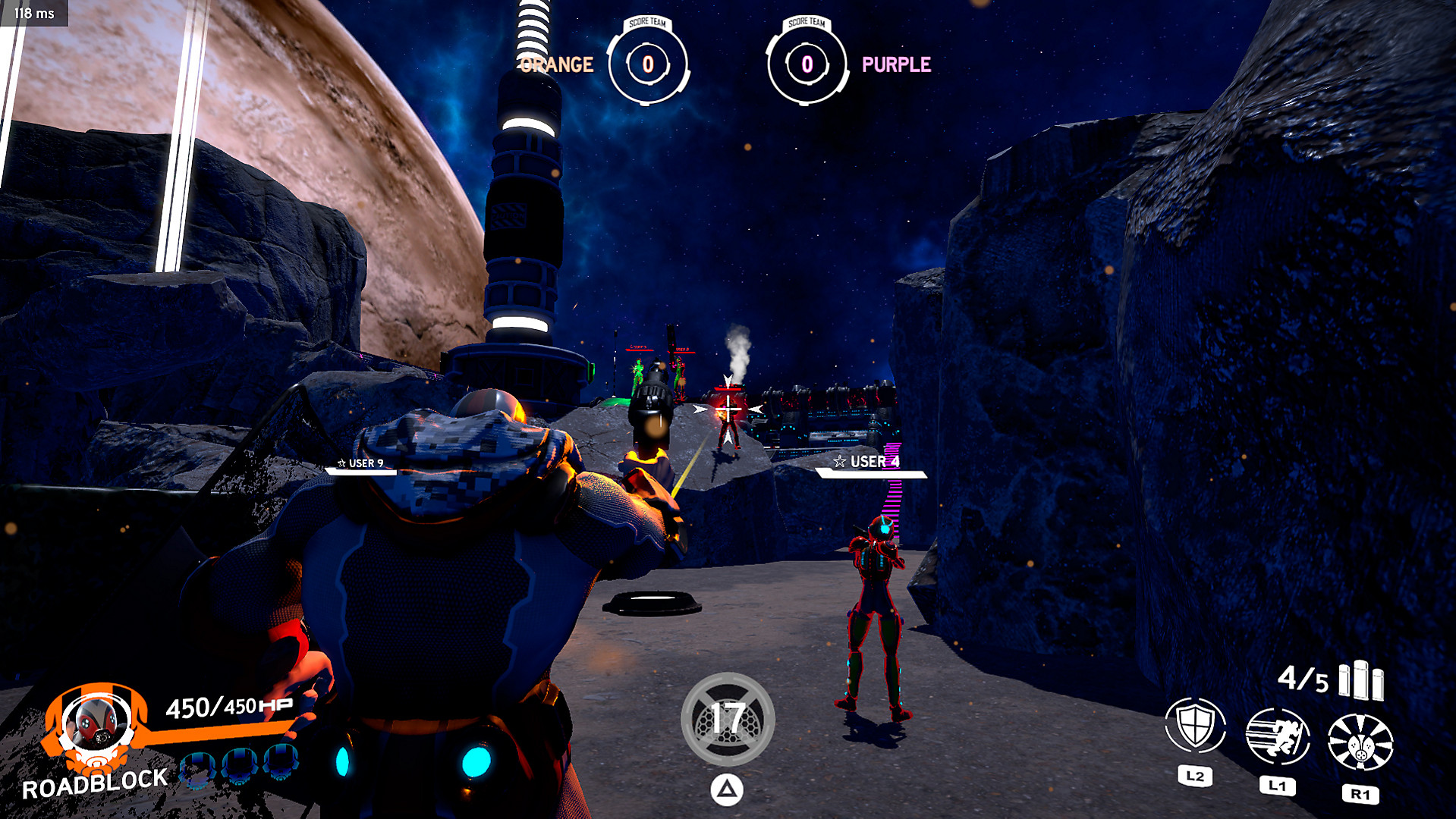 The idea here is a noble one. The developers have stated they want to give players as many options as possible to score points, but it doesn’t feel that way. Games are so quick, and the maps in which they occur so small, that these changes feel minor and lack any impact. I found I would play each match in pretty much the same way, trying to take out the other team with my current mercenaries range of abilities, and if the objective was close to hand I would try and help my team to complete it. Other than that, I felt no real need or urgency to do anything else.

This might have been different had the game itself been any fun. Truth is, it isn’t – I just couldn’t find anything to get my teeth into while I sat playing Holfraine. I’ve played a few games in the hope there was some sort of learning curve, and I maybe wasn’t enjoying it because the fault was with me. I’ve tried different mercenaries, as each one has different abilities and weapons, maybe it was that I just hadn’t found a loadout I liked? It wasn’t.

Mercenaries have a range of abilities and weapons, and all are recognisable as standard shooter tropes. You have the Tank, the Sniper, the All Rounder. Each play slightly differently which is largely due to the different abilities they each have, but because of the third-person perspective, aiming feels off and is far harder than it should be. I played one match as a Sniper, and discovered it was almost impossible to shoot anything from afar as the controls when scoped are so fiddly that the second you move the scope zooms way off target forcing you to exit the scope try again. 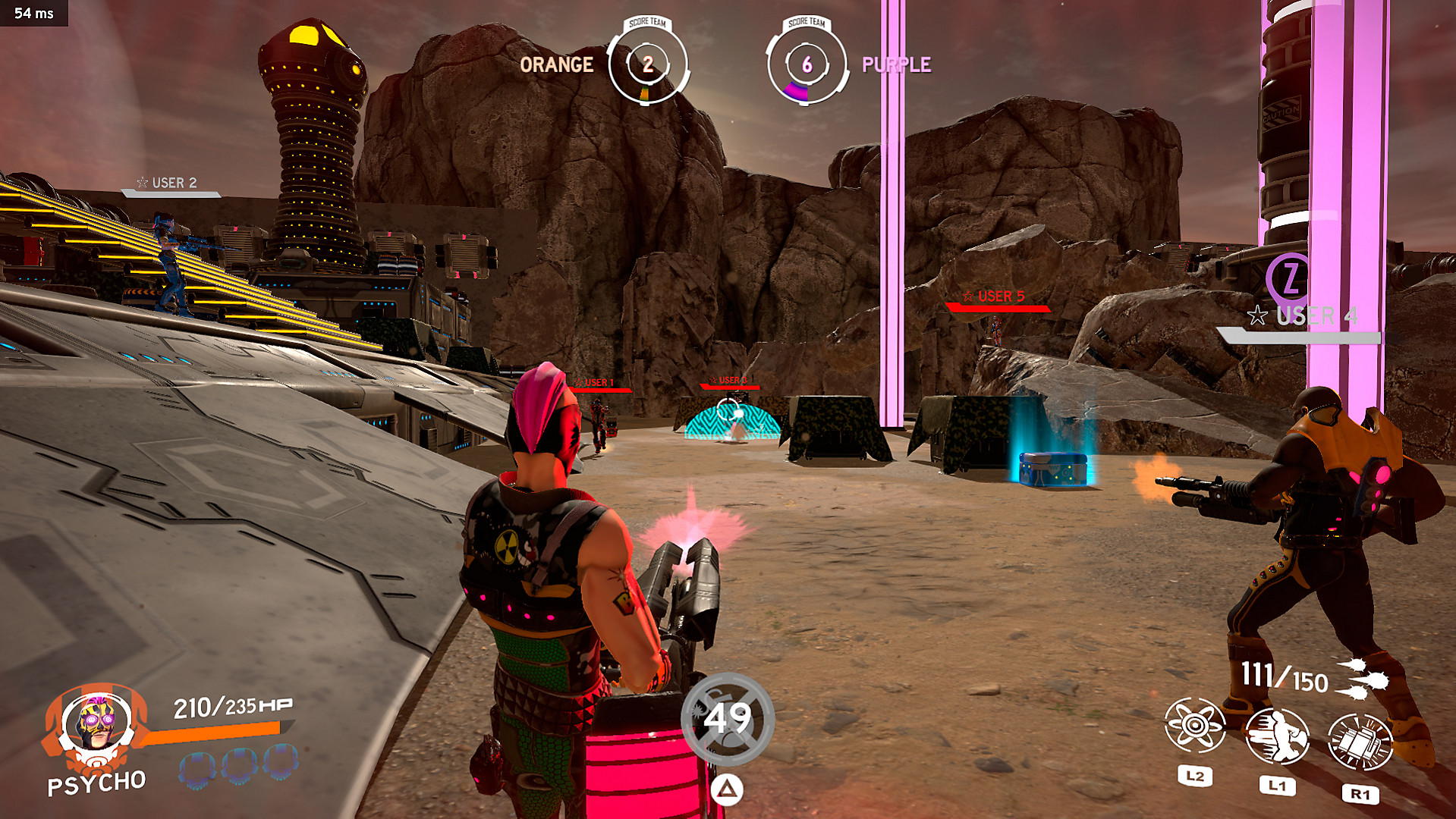 In the end, I resorted to getting as close to an enemy as I could and trying to obliterate them with my current mercenary’s abilities, and this became my go-to tactic – no strategy, no stealth, I just planned to get right up in their grill and shoot, hoping for the best. Often it didn’t end well, with me and my adversary jumping around like Mario on Meth until one of us managed to outgun the other.

What I’m trying to say is, I gave Holfraine a chance. I really, really did. No one sets out to play a game only to dislike it, but with Holfraine it just feels stuck in the past. Graphically, there is a certain nostalgic charm to the whole PS2 aesthetic Holfraine has going for it, but that’s about it. The story is non-existent plus the gameplay is disappointing and decidedly flat. Controlling my mercenary felt clumsy and unresponsive, and dealing damage I felt underpowered and outgunned the second I came face to face with an enemy. Combined, these various elements create an annoying and frustrating cocktail that equals a rather dull and lacklustre experience, especially when other games do what Holfraine is trying, but so much better.

Holfraine is a pick and mix of an online shooter, taking various elements and putting them together in a slightly dated looking package.

E3 2021: TASOMACHI: Behind the Twilight Will Be Coming to PS4 Later This Year